It sounds as easy as “just put another hat on” or “put on that coat instead of this one”.

But moving from one state into another doesn’t always work that smooth. Judgement of the state we want to leave binds us even more to it so that the next best state seems soooo far away. Even a little change feels unreachable.

State is everything and I discovered this earlier with my horses. The funny thing is that until I heard about Horses Know The Way Home, I don’t think I realized I could choose my state at will. I think most of the time I happened to be in a state and most of the time, that state served what I was about to do. If the state did not serve me or did not feel good, well, than … so be it. I’d either let time go by and deal with it or – if I had the luxury to do so – I would do something else and by taking that action my state would change along the way and I would feel better. Can you relate?

Now, on our weekly walks in the forest with Kylian and Brenda Lee, Brian often reminds me of changing my state by choice. It is something I want to learn and so he motivates me to practice. Even though I understand what he is telling me, it usually feels like faking a state and by doing so just lying to myself. Lying because internally I don’t feel that state at all! So last weekend’s adventure came in handy to explore some more about my state of being and brought an interesting “A-Ha” moment … 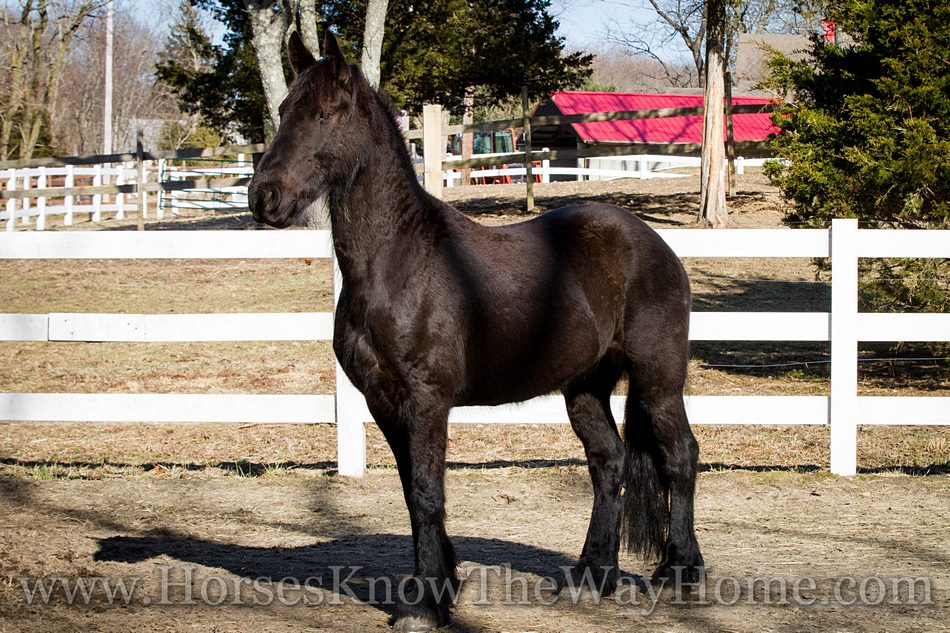 A little over a week ago, Kylian got his first pair of shoes. The reason for shoes in his case is that he had developed a crack in his right front foot over the last few months. With the first trimming since he and I arrived together in the US, we saw that there was a risk for bacteria to enter the white line. Now that the warmer weather has arrived he got a shoe on that foot with some protective polyester to fill up the crack while his hoof grows. And, for the non-horse people amongst our readers: with one shoe, there always comes a second one on the opposite side to balance things out.

Kylian did great and moved along well with his first pair of shoes so we kept on walking and playing in the first week. Last Sunday though, he already lost that shoe! Even though it fit perfectly! So feeling a little surprised about it, I decided to call the farrier and start looking for the shoe. It was a relief to hear that the farrier could come the next day and it would be great if I … found the shoe. Sure, hmmmmm, where would I start? We had been on the trails in the forest, we had been out in the field and of course, there is the paddock covered with leaves. Where and when did he lose it? And, I actually planned to do something else with both Brenda Lee and Kylian so for a moment I realized I had to say “goodbye” to my Sunday morning fun … Or not?

I decided I would go on the same walk as the day before, take Kylian with me and go find the shoe. Brian said “go out and make it an adventure, this is perfect to practice your state of being because now you will really feel curious”.

And I did, I felt curious and determined to find it. So after grooming (shedding season!) Brenda Lee and Kylian, I took Kylian with me on our adventure to find his shoe. 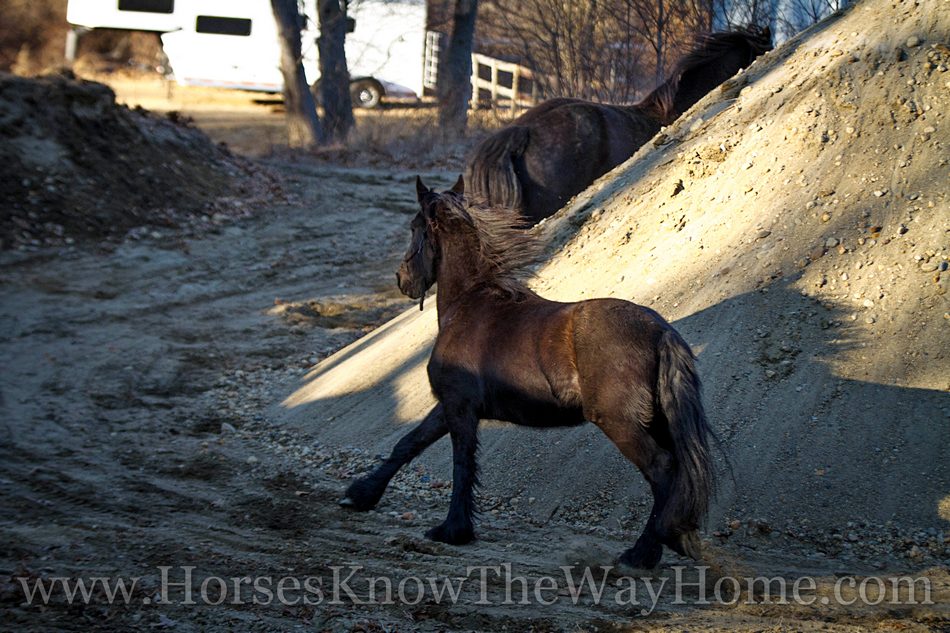 Have you ever felt it? Those moments in which you have a purpose, you are determined, your state is clear and you feel calm, centered and connected?

Kylian and I left the pasture and I decided on a starting point for our search. Totally aware of him and of myself, I turned left and he floated right with me. I started to focus on the ground and down his nose went. Even the little bits of grass popping out of the bed of leaves didn’t seem to catch his attention … he was following my focus and for a moment I believed he knew exactly what I was looking for and he was paying attention too.

We walked up the sand dunes where we played the day before and the one where he usually hesitates a little bit to climb he just walked right up. After doing the tour twice, I stopped for a moment to decide where to go next. He waited with me, not asking for anything, until I made up my mind about our next. Off we went onto the trail. Feeling him, feeling me, focusing forward and focusing down to find that shoe. And he was with me every second, every move. 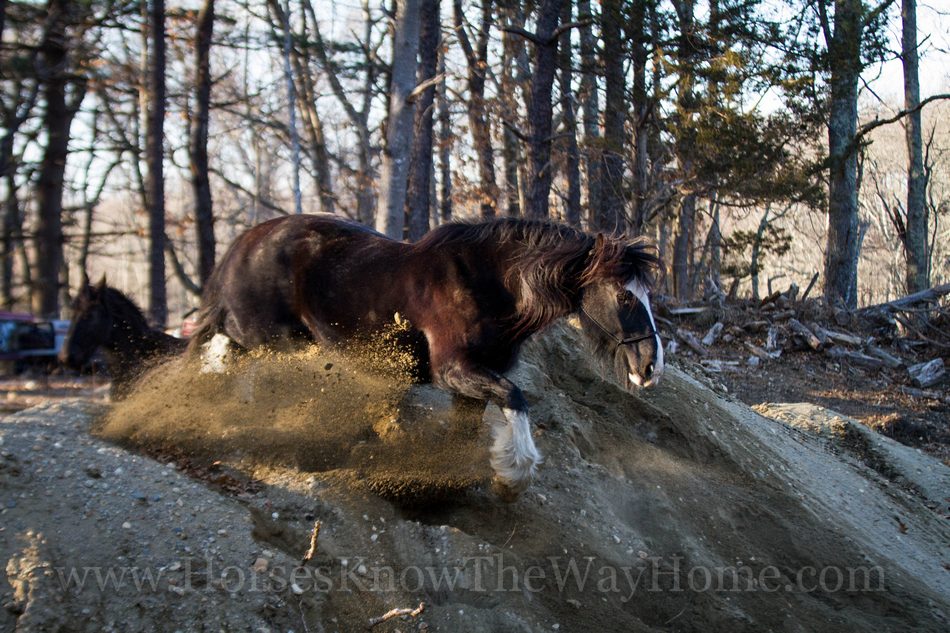 At a certain point he looked back to make sure I knew that we were really leaving Brenda Lee now. At moments like this, we usually go into a little conversation and it is not unusual he starts jumping and bucking and running around because he’s at that edge of wanting to go back to Brenda Lee. This time it seemed so much easier to communicate back to him that that was OK but we really had to move on to find his shoe. And without any effort and with a floating rope, he walked up to me and we continued our quest together.

Even at our last straight line towards the field, he didn’t accelerate or started prancing but stayed right with me. No ups and downs in my state, no need to change state because I would feel a little upset. We moved from our curious and determined state into a state of total relaxation. I let him graze in the field while looking around for a lost shoe in the growing grass, but there we were also unsuccessful. So we walked back to the pasture and Brenda Lee – who happily greeted us – and spent another great 2 hours together.

It’s not new to feel the connection with Kylian and go out for walks like this. But it was the first time that I payed so close attention to my state and why I had been successful. I had a purpose! I had something real that mattered. And my state served me to move toward that goal. I did not feel any need to explain it or to state it to be the right state. It was pure and clear and any other emotion that came up also went away like a little wave. I noticed Kylian finding comfort in this clarity.

Recognizing Kylian’s relaxed and confident state right with me from the beginning until the end motivates me to pay closer attention to each time I am clearly in a certain state and truly take in the feeling of it.

I believe that managing my state voluntarily is definitely worth practicing, because it will serve the connection (the internal connection with myself plus the connection with who’s around me). The result of this practice is more valuable than staying stuck in judgement of the undesired state.

I challenge you to try it.

Pick a purpose that matters to you. Start with a small thing if “the big thing” seems too far away or not fully defined yet.

Practice the state that will serve you to move toward it.

Learn more about your “State of Being” in the Horses Know The Way Home Academy, Series 3.  Click here to start a 14-day FREE trial today!

Share it now!
« Home Sweet Home … and Beyond
How is Your Withness? »