At some point in our life, we deal with loss …The loss of a friend, a partner, a soulmate.

In a recent conversation with my wife we talked about Quinn, the Friesian she let go off in 2011. He used to be Kylian’s best friend before he met Brenda Lee in person and he used to be Katleen’s equine soulmate, along with Kylian.

This Whispering is about how I used the story of being human to help her in 2011 with how to create life in the next chapter of the story of Quinn, her horse friend. 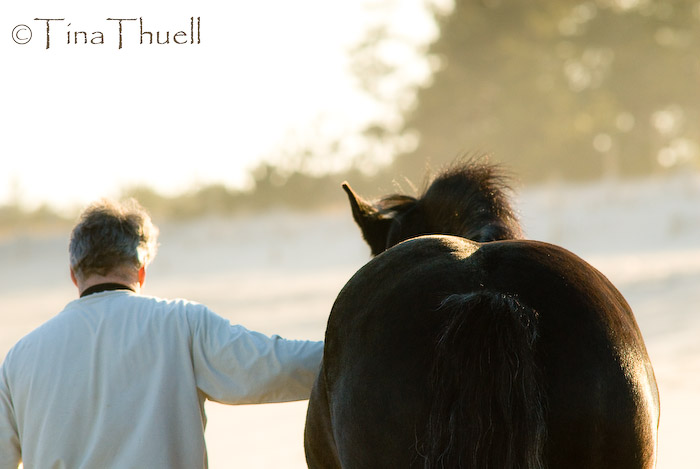 The human I’m referring to is Frank Reid, my father, and how he became more alive in my story of him since his death than when he was alive.

After his passing, I got on with my life and decided  to pursue a childhood dream of being a Body Builder.  During this venture I could often be witnessed in the gym lifting incredible amounts of weight.  People around me were amazed and gave me great space when I was working out.  Not because I wanted them to but rather because of the intense focused state I would put myself into, in order to lift these weights.  I would tap into my fathers’ violence and meanness and move weights that were previously beyond my imagination.

While in this state a funny thing happened, I was filled with gratitude for my father being my father.  Something I had lost long ago, wiped out by the states of being on the other side of too much alcohol, and what that does to an already intense personality acting out his pain on others.

Here I was, headphones on, listening to Christine Aguilera’s music as loud as it would go and the most obvious forces driving my performance were my fathers intensity, anger and violence applied to my childhood dreams in a focused pursuit.

I never asked for this intensity but here it was, available for my use to create rather than destroy. An option only made true by my choosing to direct it toward the life I wanted to create, the story I wanted to write.

I wondered if he ever had this option, if he was ever aware of this choice.

Resentment, loss and anger were transformed through awareness and understanding to gratitude, love, and support and the gift was my father “ALIVE” in my life, lifting me toward the life I wanted to create.  My father was alive in my life and I was forty at the time.  “Thank you Frank”.

Back to Katleen.  As I listened to Katleen share her feelings of her loss of Quinn I was moved to see how well she was doing.

I remember she was feeling the loss, the pain, the sorrow and she was O.K. with it.  She was actually slightly beyond O.K. to a state of satisfaction that she could at once feel pain, loss, sorrow, and confusion all the while feeling warmth, fondness, connection and love toward her companion.  She was solid in her authenticity and genuineness. Two states that Quinn taught her were the foundation of living in the moment and following your heart.  As I listened to her, I felt a sense of relief that she was doing well and a sense of gratitude toward having a friend who lives life according to the life lessons her horses have taught her.  To be in the moment, to be genuine and authentic.

In her authenticity she shared that she will never get to feel him again.  She alluded to her sense of his “goneness”,  his forever absence from her life, his death.

This is where I asked her to think about another option, his Life.

I shared with her the story of my father and asked her to consider that every horse she owns or rides from this day forth will be influenced by her relationship with Quinn. She could honor his life and bring him back into her world by feeling for his presence and guidance with every relationship she has going forward and toward the life she is creating.  She could create the story of Quinn’s next rather than his never.  The choice was hers, she was aware of the option.

I also reminded her of how so many people ask me how old Brenda Lee is, while what they are really asking is how long till she dies.  What they don’t know is Brenda Lee will always live in my life forever as Quinn does in Katleen’s story.

Visit this link to read Katleen’s guest Blog about Quinn.

Have you been in the situation of losing a loved one?

What are the gifts that your loved one(s) have left for you, today?

Share it with me and with us all and let your gifts expand.

Share it now!
« Letting Go with Gratitude to Let’s Go!
3 Habits to Withstand the Drama In Your Life »

3 thoughts on “There is Life after Death”